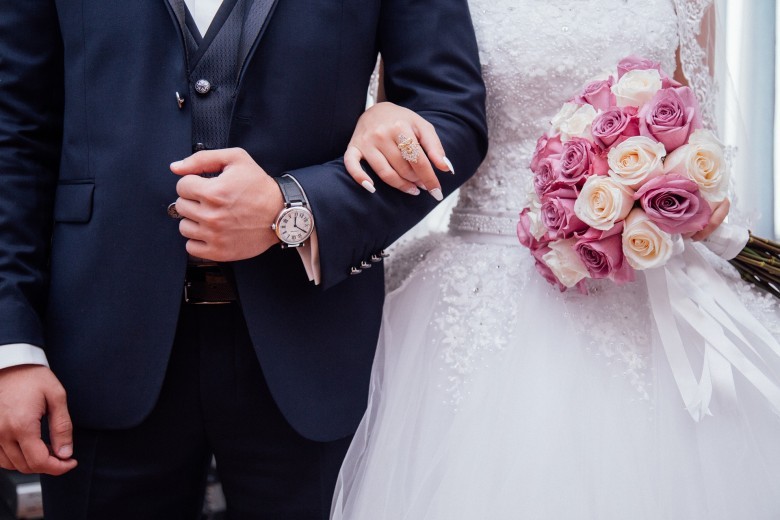 The marital union of, usually, a man and a woman is a life cycle event celebrated in all cultures and is the focus of considerable folklore. This begins with beliefs and customs that may be observed in the lead-up to the wedding day.

For example, in many Christian or European societies it is widely believed to be unlucky for the bride and groom to see each other for twenty-four hours sometimes more, sometimes less before the wedding.

The wedding car may be decorated with streamers and also, of late, with a Barbie Doll, dressed in the same material as the bridesmaids dresses, attached to the bonnet. Other mascots and forms of decoration are also common, including the traditional white ribbons.

Beliefs and customs relevant to the wedding day itself vary widely. In Lithuanian tradition, for instance, it is a popular custom to prevent the bride and groom from entering the reception. The groom must convince the guardians at the door and the guests that he and his bride should be allowed in.

Gifts are offered as an inducement. Barring the way to the fully wed state, with all its attendant rights and obligations, is a widespread facet of wedding customs, a rite of passage that marks the transition of the newlyweds from unmarried to married. Barring customs are also reported in British, American, Japanese and Carpathian tradition.

There are many interesting and colourful wedding customs observed in different ethnic and religious groups in Australia, such as stamping on a drinking glass (Jewish), linking ribbon coronets worn by bride and groom (Greek), the groom arriving at the wedding on horseback (Indian), and sugared almonds being given to wedding guests (Greek, Italian and many other ethnic groups).

The custom of giving sugared almonds has also been reported in France, Wales, England, Scotland, Israel and Belgium. In other places, raw nuts are considered appropriate food and/or gifts at weddings, a continuation of the widespread association of nuts and fertility, though in Italian tradition the nuts are generally said to symbolise good luck.

Almost always, an Australian wedding ceremony is followed by a reception, supper or party for the newlyweds and their friends and families. Often held at a reception centre or other public facility hired for the purpose, wedding receptions may also take place in the home of the bride or groom.

Characteristic elements include music, dance, song, food and drink, and speeches and toasts by the father of the bride, best man and groom. It is the duty of the best man to read out telegrams, letters, cards and faxes from absent well-wishers on this occasion.

In the past, these messages may have been of a playfully suggestive nature, though this feature seems to have faded from the contemporary observance of the custom. The gifts to the newlyweds are usually displayed at the reception.

It is important to note the dramatic changes in marriage practices in Australia even in the last twenty years, and their consequent effect on wedding customs. These changes have been documented by the Australian Bureau of Statistics, and the 2001 Census shows changes such as the rise in non-church weddings.

In the same census, 72% of couples stated that they had cohabited before marriage, although this does not stop many of these couples eventually celebrating a legal marriage, sometimes with their children present, in simple or elaborate ceremonies which may be devised by the bride and groom themselves.

Another marked change in Australian society is the high rate of intermarriage between couples of different ethnic origins. All of these changes suggest that social commentators, need to be cautious about making pronouncements about marriage, or weddings, in Australia.
--
If youre looking for a Wedding or Marriage Celebrant in Bribie Island, or a Wedding Marriage Celebrant for the North Brisbane area, contact Affinity Celebrants.