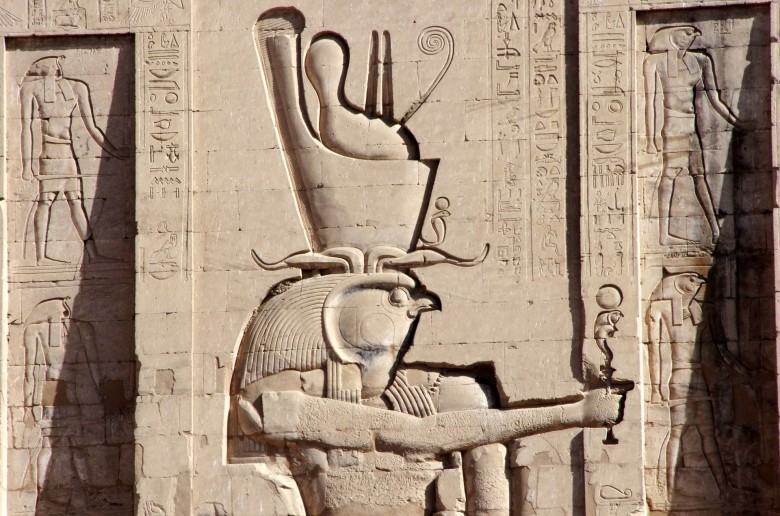 Horus, the Falcon-god whose name is attested from at least as early as the beginning of the Dynastic Period (3100 BC). Although not actually named as such, it is probably the Horus-falcon who was depicted on the battlefield and the ceremonial palettes, apparently subjugating his enemies in the battles leading to the unification of Egypt as followers of Horus. Usually depicted as a hawk or as a man with the head of a hawk, Horus was not only a god of the sky but also the embodiment of divine kingship and protector of the reigning pharaoh. Gradually the cults of other hawk-gods merged with that of Horus, and a complex array of myths became associated with him. According to one of the most common myths, he was the child of the goddess Isis, and in this role (later known as Hippocrates) he was usually depicted inhuman form with the side lock of youth and a finger to his mouth, often being seated on his mothers lap.

From the late period to the Roman period (747 BC 395 AD) a new vehicle for the image of Horus, the cippus, became popular. This was a form of protective stele or amulet showing the naked child-god Horus standing on a crocodile and holding snakes, scorpions, lions or other animals in his outstretched arms. On such cippi Horus was also sometimes associated with other deities. The purpose of the cippus seems to have been to provide healing powers to combat such problems as snake bites or scorpion stings. As a son of Isis and Osiris, Horus was also worshipped under the name of Harsiese, the god who performed the rite of "Opening of the Mouth", on his dead father, thus legitimizing his succession to the throne as earthly ruler. In a similar vein, as deceased coffin. The mythology of the Osirian Horus (rather than any of the other aspects of Horus) was principally concerned with his struggles to avenge the murder of his father Osiris and to claim his rightful inheritance, the throne of Egypt, by defeating the evil god Seth. The latest narratives of the myth tend to combine several different traditions. In the first version, Seth was Horuss uncle, whereas in the second version of the myth of Horus even before the contending became linked with the Osiris myth. The Shabaquo Stone, a 25th Dynasty inscription purporting to be a copy of an Old Kingdom text, describes the story of the earth-god Geb judging between the two and eventually awarding the throne to Horus.

However, a more lively version is provided by the Ramesside Papyrus Chester Beatty I, which details the varied sometimes ludicrous, rivalry of Horus and Seth, including a race in bouts of stone. In this version it is the sun-god RA who adjudicates at the end of an eighty year contest, although as usual it is Horus who finally becomes king of Egypt. It is possible that these mythological contendings, an even later account of which is given by the Greek writer Plutarch, may reflect a distant memory of the struggles of the two lands before unification, although few prehistorians would now attempt to use such comparatively recent documents to interpret the late Predynastic archaeological material (3200 3100 BC). During his contendings with Seth, Horus is said to have lost his left eye (which represents the moon), although fortunately the goddess Hathor was able to restore it. The eye of Horus" therefore came to symbolize the general process of "making whole" and healing. It also represented the waxing and the waning of the moon, and served as a metaphor for protection, strength and perfection; eye amulets are extremely common. Since Horus was a sky-god and a cosmogonic deity, his eyes were interpreted as the sun and the moon, and he was frequently described in the Old Kingdom (2686 2181 BC) as the god of the east, and hence, of sunrise. In this guise, he became known as Horemakhet (Horus in the Horizon) and he was also merged with RA, to become Ra-Horakhty. There were numerous forms of Horus throughout Egypt, but he is particularly associated with Edfu, the site of the ancient city of Mesen. There was a temple of Horus at Edfu from at least as early as the New Kingdom, and in the well preserved Ptolemaic temple, he was worshipped as a part of the triad with Hathor and their child Harsomtus. From at least as early as the 24th Dynasty Horus Khenty-Irty was worshipped at Letopolis in the western Delta.

Horus was also closely associated with Hierakonpolis (literally "town of Hawk") which was known as Nekhen during the Pharaonic period. From the temple at this site was excavated the golden falcon head which probably formed part of a cult image. In his role as Horus of Behdet, a town in the Delta, he was also portrayed as a winged sun-disc, an image that constantly recurred in the decoration of many other temples, harking back to his original manifestation as a god of the sky.

Young Horus ancient Egyptian statue 305 30 BC now available along with many other Egyptian antiquities. Marvel at the extraordinary selection.