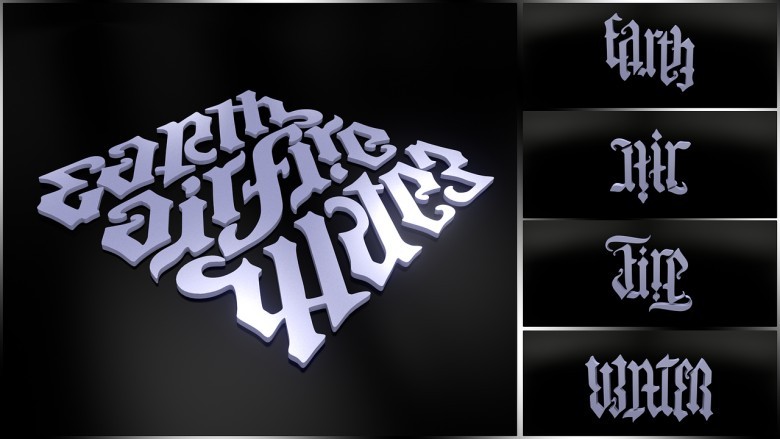 I am currently studying a lot of word-related art, amongst all the other things (I am a bit of a sponge when it comes to new information and knowledge). I suppose like a lot of other people, once I read Dan Browns books ( http://www.danbrown.com/) it inspired me to delve deeper into the world of ambigram art, after thoroughly enjoying the illustrations by John Langdon (http://www.johnlangdon.net/).

Although I had heard the term before, and was often found sketching designs that reflected the idea of ambigrams, I had not previously looked into them. So, I thought Id share the information I have found out recently, and would gladly welcome any more information on this subject. Feel free to discuss/comment or get in touch.

An ambigram (also known as an inversion), is a graphical image of a word or words, which can be read as it is presented, but also in another direction or orientation. Douglas R. Hofstadter has been credited with the first published reference to the term, describing an ambigram as a "calligraphic design that manages to squeeze two different readings into the selfsame set of curves."
The 1999 edition of Hofstadters book, Gödel, Escher, Bach presents a 3-D ambigram on the front cover.

There are several categories that ambigrams commonly fall into:

Rotational: A design that can be presented more than once when rotated through a fixed angle, commonly being 180 degrees. The word spelled out from the various other angles is often the same, but can also be a different word.

Mirror: A design that can be read in a reflection (e.g. a mirror), usually the same word both ways, but can also be a different word.

Figure-ground: A design in which the spaces between the letters of one word form another, different word.

Chain – A design where a word/words are interlinked in the form of a repeative chain. Usually the letters are overlapping which means a word will start partway through another word. Chain ambigrams are often presented in the form of a circle.

Space-filling: Like chain ambigrams, but tiled to fill the 2-D plane it is placed upon.

3-Dimensional: A design where an object is displayed in such a way as to appear to read several letters/words when viewed from different angles. These designs are often composed using constructive solid geometry.

Perceptual shift: A design which does not require symmetry but can be read as two different words, depending on how the curves of the letters are composed and interpreted.

Natural: A natural ambigram is a word that uses the same basic theory as one or more of the above symmetries when in its natural state – requiring no typographic styling or creation. These are the type of words that often even small children discover and are intrigued by. There are natural rotational ambigrams and natural mirror ambigrams and so on…

In general, ambigrams are graphics design-based images that play with optical illusions, symmetry and visual perception. The most successful ambigrams combine a strong relationship between form and content (e.g. the way they flow and are composed, and the actual word(s) used in relation to them). Since Dan Browns books, the popularity of ambigrams has started to increase heavily… even leaving their mark as tattoos (a current trend that is also gaining huge demand in the tattoo world). There are even some tattooists that specialise purely in ambigrams!

The current most common celebrity ambigram tattoo is that of Method Man (http://www.method-man.com/), which reads either LIFE or DEATH, depending on the angle you look at it from (shown left).

Two other websites worth browsing on this subject are:
http://www.ambigram.net/ (includes a very useful quick tutorial on how to learn to draw ambigrams)
http://dmoz.org/Recreation/Humor/Wordplay/Ambigrams/ (features a whole list of the most popular ambigram websites)
An ambigram book worth reading up on (re-published): Wordplay: The Art and Science of Ambigrams, by John Langdon. Published by Bantam Press on 1st November 2005. ISBN 0593055691. Available at Amazon