Different Ways To Cook Your Ham 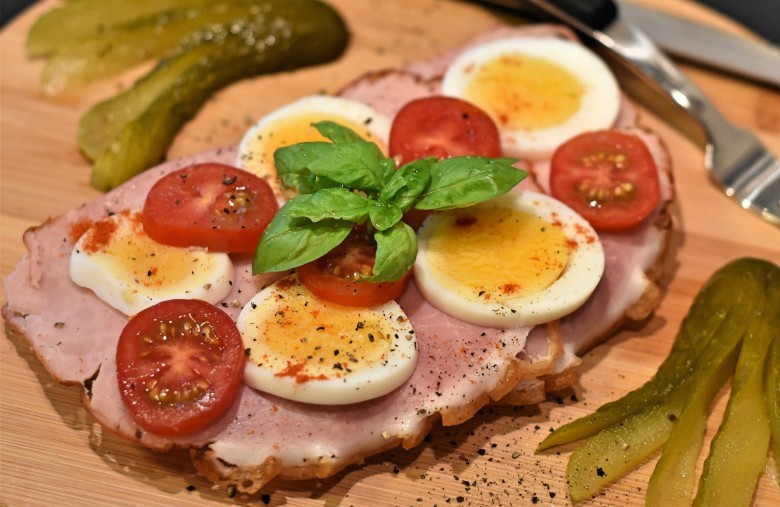 Different Ways To Cook Your Ham

BACON COMBINED WITH OTHER FOODS.--Many other foods may be fried in the same way as eggs and served with bacon. For instance, sliced apples or sliced tomatoes fried in bacon fat until they become tender, but not mushy, are delicious when served with crisp pieces of bacon. Also, cold cereals, such as cream of wheat, oatmeal, corn-meal mush, etc., may be sliced and fried until crisp and then served with bacon.

HAM.--The hind leg of pork, when cured and smoked, is usually known as ham. In such a ham, the proportion of fat and lean is about right, but when ham is bought with the rind removed, much of the fat is also taken off. The best hams weigh from 8 to 15 pounds, and have a thin skin, solid fat, and a small, short tapering leg or shank.

Several ways of cooking ham are in practice. Very often slices resembling slices of round steak are cut from the whole ham and then fried or broiled. If a larger quantity is desired, the entire ham or a thick cut may be purchased. This is boiled or baked and then served hot or cold. It is a good idea to purchase an entire ham and keep it in supply, cutting off slices as they are desired. In such an event, the ham should be kept carefully wrapped and should be hung in a cool, dry place. In cutting a ham, begin at the large end and cut off slices until the opposite end becomes too small to make good slices. The piece that remains may be cooked with vegetables, may be boiled and served either hot or cold, or, if it is only a small piece, may be used for making soup.

BROILED HAM.--The methods of broiling and pan broiling are very satisfactory when applied to ham that is cut in slices. Ham is pan-broiled in the same way as other meats. To broil ham, place slices 1 inch thick on the hot broiler rack and sear quickly on both sides. Then reduce the temperature and broil for 15 to 18 minutes, turning the ham every few minutes until done. Remove to a hot platter. Add a little water to the drippings in the broiler pan, pour this over the meat, and serve at once.

HAM BAKED IN MILK.--A change from the usual ways of preparing slices of ham can be had by baking them in milk. A point to remember in carrying out this method is that the meat must bake slowly in order to be tender when it is done.

Secure a 2-inch slice of ham, place it in a dripping pan, and completely cover it with milk. Put in a moderate oven and cook for 2 or more hours. When the ham is done, its surface should be brown and the milk should be almost entirely evaporated. If the liquid added in the beginning is not sufficient, more may be added during the baking.

BOILED HAM.--Sometimes it is desired to cook an entire ham, particularly when a large number of persons are to be served. The usual way to prepare a whole ham is to boil it. When it is sufficiently cooked, it may be served hot or kept until it is cold and then served in slices. Nothing is more appetizing for a light meal, as luncheon or supper, or for picnic lunches than cold sliced ham. Then, too, boiled ham is very delicious when it is fried until the edges are crisp.

To prepare boiled ham, first soak the ham in cold water for several hours and then remove it and scrub it. Place it in a large kettle with the fat side down and cover well with cold water. Put over a slow fire and allow to come to the boiling point very slowly. Boil for 15 minutes and skim off the scum that has risen. Simmer slowly for about 5 hours, or at least 25 minutes for each pound of ham. Take from the kettle and remove the skin about two-thirds of the way back. It will be found that the skin will peel off easily when the ham is cooked enough. Garnish in any desirable way and serve hot or cold.

BAKED HAM.--Another very appetizing way in which to cook an entire ham is to bake it. This involves both cooking in water on the top of the stove and baking in the oven. While this recipe, as well as those preceding, specifies ham, it should be remembered that shoulder may be cooked in the same ways.