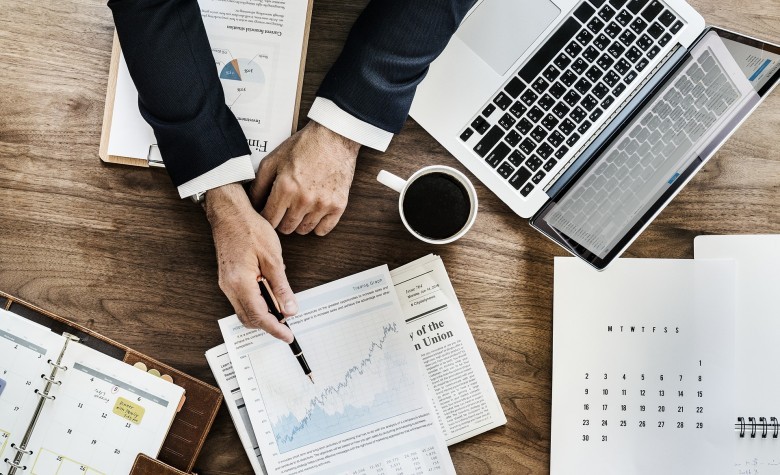 A linear regression model with two predictor variables can be expressed with the following equation:

Interpreting the Intercept
B0, the Y-intercept, can be interpreted as the value you would predict for Y if both X1 = 0 and X2 = 0. We would expect an average height of 42 cm for shrubs in partial sun with no bacteria in the soil. However, this is only a meaningful interpretation if it is reasonable that both X1 and X2 can be 0, and if the dataset actually included values for X1 and X2 that were near 0. If neither of these conditions are true, then B0 really has no meaningful interpretation. It just anchors the regression line in the right place. In our case, it is easy to see that X2 sometimes is 0, but if X1, our bacteria level, never comes close to 0, then our intercept has no real interpretation.

Interpreting Coefficients of Continuous Predictor Variables
Since X1 is a continuous variable, B1 represents the difference in the predicted value of Y for each one-unit difference in X1, if X2 remains constant. This means that if X1 differed by one unit, and X2 did not differ, Y will differ by B1 units, on average. In our example, shrubs with a 5000 bacteria count would, on average, be 2.3 cm taller than those with a 4000/ml bacteria count, which likewise would be about 2.3 cm taller than those with 3000/ml bacteria, as long as they were in the same type of sun. Note that since the bacteria count was measured in 1000 per ml of soil, 1000 bacteria represent one unit of X1.

Similarly, B2 is interpreted as the difference in the predicted value in Y for each one-unit difference in X2, if X1 remains constant. However, since X2 is a categorical variable coded as 0 or 1, a one unit difference represents switching from one category to the other. B2 is then the average difference in Y between the category for which X2 = 0 (the reference group) and the category for which X2 = 1 (the comparison group). So compared to shrubs that were in partial sun, we would expect shrubs in full sun to be 11 cm taller, on average, at the same level of soil bacteria.

For a discussion of how to interpret the coefficients of models with interaction terms, see Interpreting Interactions in Regression.

Karen Grace-Martin, founder of The Analysis Factor, has helped social science researchers practice statistics for 9 years, as a statistical consultant at Cornell University and in her own business. She knows the kinds of resources and support that researchers need to practice statistics confidently, accurately, and efficiently, no matter what their statistical background. To answer your questions, receive advice, and view a list of resources to help you learn and apply appropriate statistics to your data, visit www.analysisfactor.com.