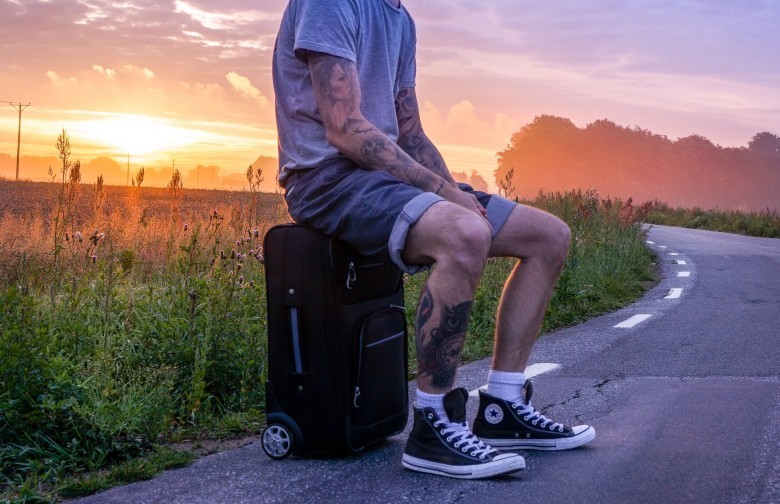 Sanskrit is ancient. Historians date it to before 1500 BC. It was originally a language used for the Hindu religion, then expanded into royal Indian courts, and eventually found its way into everyday use. Today, Sanskrit is only used in the Hindu and Buddhist religions. In this respect, Sanskrit shares the same fate as Latin.

Did Sanskrit tattoo designs exist in ancient India? No one knows now. However, we know that henna temporary tattoos have been used by women in India and the Middle East for many hundreds of years, and we also know that India was quite technologically advanced in ancient times (India was producing and exporting high quality steel when Europe could barely produce poor quality iron). So it is quite possible that Indians already had tattoos in their distant history.

Formally, tattoos are taboo in Hinduism. In this respect, it is similar to the other major religions in the world. On the other hand, only priests still learn Sanskrit. You could walk past the common man in any Indian street with your Sanskrit tattoos and none of them would be able to read what it says.

In America, surveys show that 17% of the population have at least one tattoo. While you probably wont see a judge, lawyer or banker sporting a tattoo, they are fair game for almost anyone else.

How Did Tattoos Become Popular?

Why have tattoos become so widely accepted? Partly because of technological advancements. In the past, tattoo parlors were dark, poorly lit and dirty places strongly resembling underground gambling dens. Tattoo johnnies used the same needles for everyone, and rarely sterilized their needles. Nowadays, we have professional tattoo studios with high-tech equipment and needles are only used once then thrown away. In some places, getting a tattoo is like going for a hair cut or beauty makeover - so great is the change in image of tattoos.

The internet is another contributing factor. People dont accept what they dont know about. But now, anyone can find out all they want about tattoos by doing a simple search on the internet. There is no longer anything to fear. The internet also lets people find good tattoo art. You can find and download nearly any kind of tattoo flash nowadays - anything from Sanskrit tattoo designs to tribal tattoos to fantasy tattoo art like fairies and dragons. You are no longer limited to what the tattoo johnny can design in his little parlor.

Sanskrit Tattoo Designs On The Wrist

On the wrist, you can have a tattoo on top, on the inside or even around the entire circumference.

On top of your wrist or on the inside of your wrist, you will probably only have a single Sanskrit character or image. One good and popular design is the Om symbol - a powerful symbol which is one of the sounds which created the universe. It looks cool and mystical, and is completely monochrome.

Or you could get a lotus flower tattoo like Jessica Alba. You could make one symbolic lotus flower which looks like the Mandalas used for Yoga meditation. Unlike the Om Sanskrit tattoo, the Padma lotus flower will be bright and colorful. Spiritually, the lotus flower represents rising above the masses - just like the lotus which has its roots far underwater in the mud and beautiful flowers high above on the surface of the water.

Around the circumference of the wrist, Sanskrit tattoo designs are not really suitable for a traditional thick armband tattoo. However, Sanskrit alphabets are suitable for thin armband tattoos called permanent bracelets. Sanskrit alphabets have horizontal bars on top and curves below - you just link up all the bars on top and you have a beautiful tattoo going around your wrist.