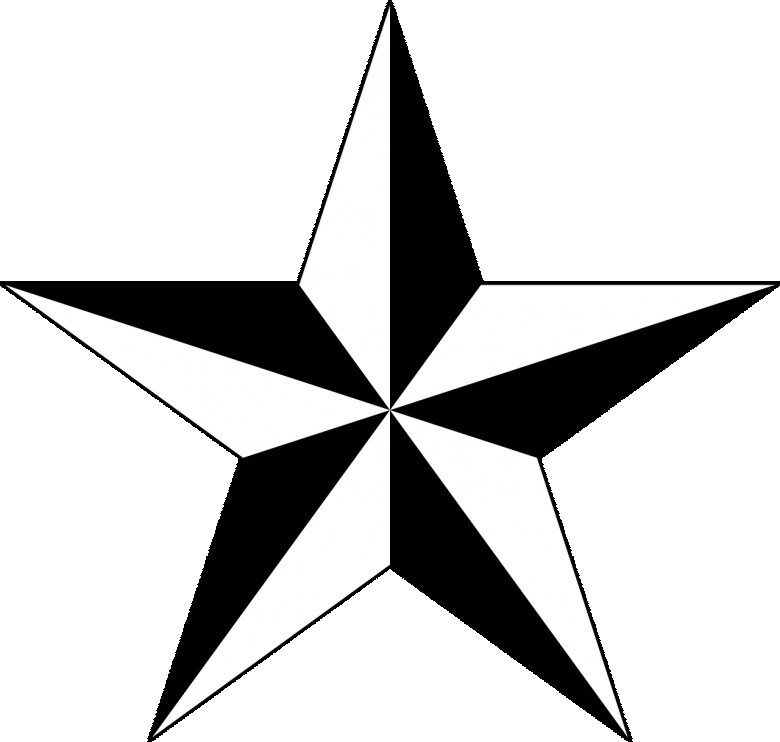 Historically
most everyone agrees that Sailors were the first people to get nautical star tattoos. In fact the very word nautical relates back to sailing. So this connection has been pretty firmly established. Most people would agree the sailors were a pretty superstitious group historically and sailor lore abounds with superstitious and fantastical stories of life and death and being lost at sea. Early on sailors navigated by the stars at night and the north star became the symbol for finding ones way home. Once you know where the north star is you can point your ship in the right direction to get home. So the star became a symbol for finding ones way home or more symbolically even finding ones path in life. Therefore many sailors would tattoo nautical stars on their forearms as a good luck symbol in hopes of returning home.

However their modern day meaning is a more debated topic. Many believe that groups including gay and lesbians, punk rockers and those in the military have adopted the nautical star tattoo as a very important symbol. The diversity of these three groups has lead many to argue the meaning of their tattoos.

For the military the connection is pretty obviously point back to the early sailors and the symbolism and meaning is the same as the early sailors. Many military people get a nautical star tattoo as a symbol for finding ones path home safely. Of course this can also include more symbolically just finding ones way in life.

Here is a quote we found from a member of the armed services and his interpretation of the tattoo:

"I am in the United States Army, an MP who searched towns and villages for Al Quida and insurgents. I was in Iraq for 1 year. I have a red and black nautical star on my wrist. The reason I got it was because when I was out there, I felt it was a guide to guide me home to my family safely. I got it so that it would remind me that I am going to make it to see my son grow up. I am not gay, it doesnt matter what you believe it represents, it means something different for everyone. Out in the desert, I would look up at the stars and think about home. So anyone can think what they want to, that is what it means to me."

Punk rockers have also adopted this as a popular symbol to have tattooed. The punk movement traces its history and use of the nautical star tattoo back to Sailor Jerry. Sailor Jerry is historically one one of the most famous tattoo artists ever. He was well known for his innovative and "cool" designs. Punks have taken this symbol and it has very much the same meaning of finding one way in life. Being the rugged individualists type Punks are drawing to the symbolism of true north and finding one own unique way in life. So the Nautical star has become a symbol for this. You see many punk bands that have full sleeve tattoos typically incorporate nautical star tattoos either on their elbows or elsewhere.

The lesbian and gay connection is the one that does not seem so obvious at first. Historically back in the 1940s and 50s when alternative lifestyles were not the norm and often women had to hide their alternative choices they would sport a hidden nautical star. Often they would get the star tattoo done on the inside of their wrist where it could easily be hidden by a watch during the day but shown off in the evening when out on the town. Today many lesbians where the nautical star tattoo to show their connection with their early pioneering sisters. Here is a little evidence to support my points.

"Heres the passage (with some pieces dropped) from "Boots of Leather, Slippers of Gold: The History of a Lesbian Community" by Elizabeth Lapovsky Kennedy and Madeilne D. Davis copyright 1993 p. 189.

"...During this same time period, the cultural push to be identified as lesbians- or at least different- all the time was so powerful that it generated a new form of identification among the tough bar lesbians: a star tattoo on the top of the wrist, which was usually covered by a watch. This was the first symbol of community identity that did not rely on butch-fem imagery. We can trace this phenomenon back to an evening of revelry in the late 1950s, when a few butches trooped over to "Dirty Dicks" tattoo parlor on Chippewa Street and had the tiny blue five-pointed star put on their wrists. Later, some of the fems of this group also go the idea one night and did it...The community views the tattoo as a definite mark of identification..."the Buffalo police knew [that] the people that had the stars on their wrist were lesbians and they had their names and so forth. That it was an identity thing with the gay community, with the lesbian community". The fact that the star tattoo was created by those who were firmly into roles, in fact by the group that was considered the butchy butches and their fems, suggest that the force to assert lesbian identity was strong enough to break through the existing traditions of boldness based in butch-fem roles. The stars presage the methods of identity created by gay liberation. In fact, the mark has become something of a tradition in local circles and has seen a revival since the 1970s."

This meaning of the symbol has of course created a lot of problems and arguments among the other two groups of bearers of nautical stars. Most puck and military people do not want to have a nautical star that points back to anything from the lesbian movement so many will say that there is no connection there and this is false.

Here is a quote from another armed forces member about the symbolism of the nautical star among the gay community:

"This "gay symbol" is a load of hooey that someone made up VERY recently. The nautical star tattoo has been around nearly as long as tattooing itself. The late Celts (or early Irish, depending on your view of World History) were said to have been the first to have the tattoos, although evidence of it being used on ships in Spain has been found pre-dating the Irish claim.

As a Marine, its a very commonplace symbol amongst us if we have been part of a Boat Raid company, red for port, green for starboard on varying parts of the body. On ship, I saw about a million different variations on the Sailors I was was serving with, obviously harking back to the sailor roots."

Here is a quote from a punk rocker and his feelings about the symbolism of the tattoo:what idiots..even the military boys dont know what it really means....JUST SO YOU ALL KNOW!!!!!it was used by OLD sailors.. and the symbol represents North on a Map ...and it is the North Star the sailors would use it as a baring to get home....you can find it on Really really old maps and old navy vessels... Punk Rock.. well we use it because we can and because Sailor Jerry made the coolest tattoos who started putting them on everyone.. my grandfather even had one thus being used as a traditional icon"

It just goes to show that when the same powerful symbol is used over and over again over decades of time it can taken on
very different meanings for different groups. So all of those that you see sporting a nautical star tattoo might not all have the same interpretation of its symbolism.

So do you have a nautical star tattoo or think about getting one in the future? Which meaning of the symbol will you get the nautical star for? As long as you know what the symbolism behind the star is for and you have gotten it for the right reason to either support the lesbian movement or as a symbol to finding your way!