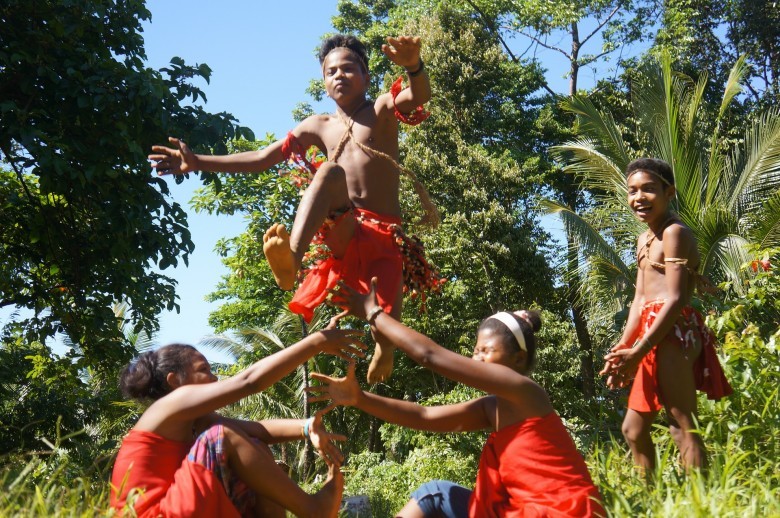 Folk songs are, quite literally, songs of the people. And in determining the identity of a country, one can look no further than this form of music for clues to a particular culture. This list of Filipino folk songs offers a few examples of the many simple yet timeless tunes long since ingrained into the Philippine peoples consciousness.

This song is as familiar to Filipino schoolchildren as the "ABCs" and "Twinkle, Twinkle, Little Star" are to kids everywhere. Credited to have been written by composer and 1997 National Artist for Music Felipe de Leon (1912-1992), it tells of the traditional Filipino rural house, the humble "bahay kubo" or nipa hut, and goes on to enumerate the various vegetables planted in its vicinity.

Also called "Tong Tong Tong Tong Pakitong-kitong," this Filipino folk song has both a Tagalog and Cebuano version. It describes a crab that is delicious to eat, but hard to catch because of its snapping pincers.

Credited to Felipe de Leon, "Magtanim Ay â€˜Di Biro" ("Planting Rice is Never Fun") describes the tedious chore of planting rice. It has been covered by Filipino rock band The Dawn, and former president Joseph "Erap" Estrada even rewrote it into a much more "inspirational" version entitled "Kung Tayoy Magtatanim" ("If We All Plant Rice").

A popular example of the traditional Filipino love song genre "kundiman", this song was made famous by Filipino singer and actor Ruben Tagalog (1920-83). The real title of the song is actually "Aking Bituin" ("My Star"), its current title having been derived from its first two words "o ilaw" ("o light").

"Ang Pipit" ("The Sparrow") relates the story a sparrow who falls off the branch its perched on after being stoned by a cruel man. It was co-written by Lucio D. San Pedro (1913-2002) and Levi Celerio (1910-2002). Named National Artist for Music and Literature in 1997, Celerio had composed over 4,000 songs and has even been included in the Guiness Book of World Records for his unusual talent of playing music from a leaf.

Another collaboration from Lucio San Pedro and Levi Celerio. "Sa Ugoy ng Duyan" ("The Swing of the Cradle") is a haunting and nostalgic lullaby expressing the feelings of a child finding tranquil security in the arms of a loving mother.

This song describes the beauty and serenity of life in the countryside. It was written by Santiago S. Suarez and popularized by Filipina singer and "Queen of Kundiman" Sylvia la Torre.

Written in 1929 by Filipino poet Jose Corazon de Jesus ("Huseng Batute" 1896-1932) and later set to music by Constancio de Guzman (1903-83), "Bayan Ko" ("My Country") was meant as a patriotic song protesting the American occupation of the Philippines. Since then, it has practically been a second national anthem for freedom-loving Filipinos, a theme song for some of the most momentous events in Philippine history. Its most famous rendition is the one by Filipino folk singer Freddie Aguilar.

It can be said that a country is defined by its folk songs. From this list of Filipino folk songs, we can gather that the people of the Philippines are a humble folk, full not only of mirth but also of deep aspiration. They are also an industrious people, with a love for the simple things in life, as well as a great yearning for peace and national freedom. And of course, the Filipino people are a talented lot, capable of crafting songs that reflect the nature of their beloved country.Please click these links if you want to know more about list of Filipino folk song or list of love songs in general.