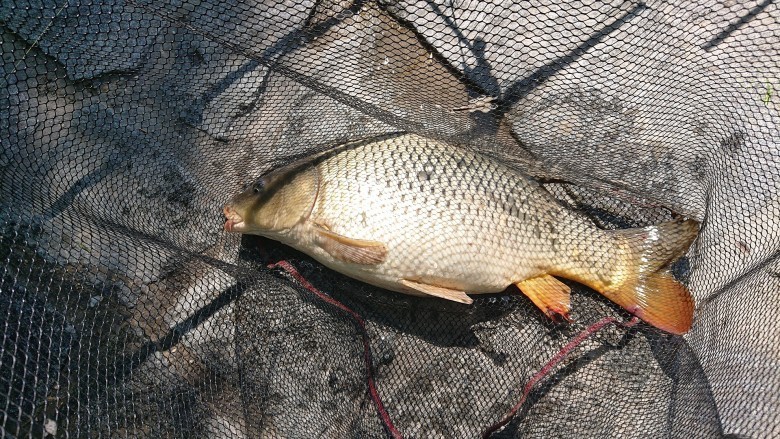 * Ideally, we fishermen would deliver the hook on its own, direct into the mouth of the fish by magic! *

Well, there IS magic available if we look a little deeper...

People have thought of many unique and advanced methods to get their fishing hook delivery fool-proof; from using semi-permeable membranes filled with amino acids, to sponge hooks full of irresistible goodies! The next best thing is to deliver a bait which is alive with amino acids, because it is being actively digested by various means!

There are various enzymes that act upon the different food groups, some which may be sourced, to use in your bait to predigest its food group ingredients, making your bait a far more energy-efficient nutrition source, so making it as attractive as possible:

The crystalline forms of trypsin, amylase and can be used for example. Fishing bait companies offer it. They are the enzymes the carp use themselves in digestion.

For natural enzymic application, for example, amylolytic yeast strain enzymes have shown similar optimum temperature and pH ranges in tests on wheat, as amylases from bacteria.

Betaine is closely related to cystine, and is a proven attractor. Used in bait, it has been claimed to work best with the combined use of plenty of amino acids. It is recommended at 1-2 gram / LB, although it is more effective at far higher doses...

It is also used in aquaculture feeds and been used by select anglers for years as in Finnstim in milk protein baits.

The crystal form of bromelain (from pineapple) is supplied by health food companies as a tonic, and taken at up to 1000 mgs a day as a human digestion aid. It efficiently hydrolyses most soluble proteins at pH 3 to 10, at a wide range of temperatures for liquid and many amazing carp attracting substances.

Casein, hemoglobin, gelatin, soya protein, fish and shellfish proteins, etc. These are converted to peptides and amino acids. It has (very conveniently for us) a wide range of effective acid-base levels (pH), and temperatures.

Mixed with base mix ingredients, they gradually reduce the structure to a mush, if levels are too high; a teaspoon per pound is sufficient to begin the effect. Once boilies and other baits have been prepared and left to cool and dry after boiling, freeze immediately, to prevent baits predigesting too quickly in advance of fishing. Enzyme-treated baits lose much of their unique attractiveness if the enzyme activity is reduced or stopped for any reason, before backside use.

In the 1980s, I once met the world carp record holder (at that time), Kevin Ellis, while he was fishing. He was throwing his free baits out before casting out. He explained that the large drum, full to the top with bait (looked like many kilos) would all have to go into the water immediately - before it all melted; because it was so extremely enzyme-active! (But obviously very highly effective!)

Using enzymes, its recommended by some to keep hook baits in a pre warmed flask, e.g. 60 plus degrees, to keep the enzymes active right up to the point of use. This is all worthwhile. Results on such baits can be truly amazing when sufficient bait has been applied to a water, extracting the very biggest fish, even, at times, in days rather than weeks!

Id always keep my hook baits warm, even if only to allow more bacteria to act and begin bioactive fermentation on the bait, making them feel sticky and smell slightly sickly, as sugars and alcohols are produced.

You can use a pre warmed flask to keep your hook baits actively curing, even if youre not using enzymes in your bait. Getting your baits to begin to ferment is one of the best ways to deliberately maximize your finished boilies attraction. Bioactivity by natural bacterial enzymes can be used on any chemically unpreserved fresh or frozen bait.

This is one of the secret methods those anglers in the know have always used as an edge. Even use it on any frozen fresh shop-bought baits. Defrost them an average 2 to 3 days before use, and keep them warm until use! (Bring them more alive by encouraging bacterial bioactivity!)

It is obvious that bacteria play a vital role in the way carp source and are able to synthesis food because the digestive tract is so short and inefficient compared to our own. The carp digestive tract has evolved in a way that reflects the aquatic food sources available. It seems to extract maximum nutritional benefits in ways that are very different from our own digestion! What a carp eats and how it prefers it in a particular state of breakdown may seem amazing and even disgusting to us!

Did you know that 10 out of 10 dogs prefer their food sweetened! Specialist bacteria are put into dog food to create more of this effect to trigger the dogs into salivating and consequently picking up their food and eating it. Dog food companies spend Â£1000s in research to develop the best of this effect in their products!

The action of these enzymes has much in common with what we are aiming to achieve, in baits for carp!

Modern Balanced profile carp boilie baits mean optimally attractive, correct ratios of proteins, carbohydrates, fats, and supplemental vitamins, minerals, salt, and trace elements. These are not at all necessary to catch carp, but they certainly have many many benefits on catches and carp general health and growth rates!

Remember, the carp has a very short, alkaline digestive tract! Ideally, this food needs to be in a form that is actively breaking down, for the carp to derive best benefits from it, or, in an easily digestible form, like that in bloodworms, fly larvae, shrimps or water snails, etc.

One thing in favour of paste or dough baits and even pellets of different types, is they do not suffer the harmful effects of boiling.

Sometimes, this point is reached in free baits, days after youve gone home, as bacteria act on them in the water. It is more than likely that this is the easiest form for the carp to digest!

The absolute cutting edge of carp bait production, may be in keeping enzymes stable in baits after boiling, and may even involve using natural bacterial enzymes in combination with balanced casein / soya bean peptone content, for example. It may be possible that more enzymes are produced as more pre-digested materials are produced inside the active boilie bait, (like pork or milk, or yeast, or liver extracts,) as bacteria levels are improved and become more abundant?

One important area is the science of retaining enzyme stability in heat and changing pH conditions in the bait. PH buffers are involved to protect enzyme potential and activity.

Enzyme production using the industrial peptone 1V was dependant upon its concentration: too much, and there was an excessive nitrogen build-up, as in amino acids and ammonia, which then reduced the protease production. (The peptone was the nitrogen and carbon source). Soy tone produced the second-best enzyme production, and the third was corn steep liquor.

I would surmise from this, that not only can corn steep liquor be effective in translating whole food proteins into digestible forms by bacterial enzyme or other means, but also it may stimulate the production of free L-glutamic acid, within the bait ingredients producing a self digesting, self taste-enhancing bait!

Top catches are mostly achieved by those people who push barriers a little, who think and do things a little differently to the majority. So go on; why not be a little bit different; the fantastic rewards are just waiting for you!

The author has many more fishing and bait edges up his sleeve. Every single one can have a huge impact on catches. (Warning: This article is protected by copyright, but reprints are OK with a link.)