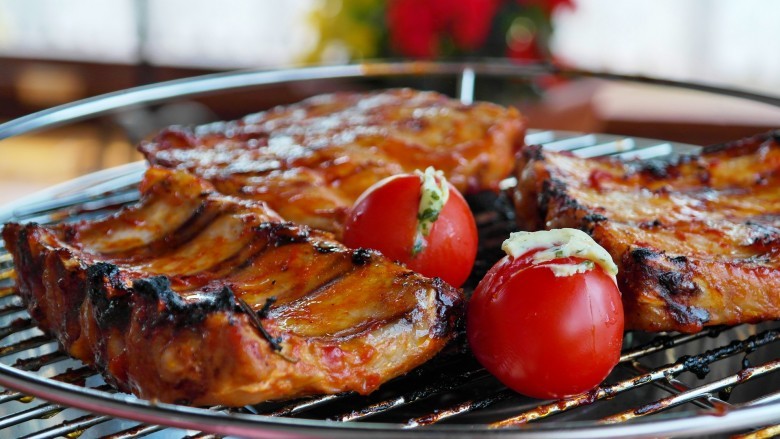 If you are cooking on a gas grill, it is imperative you do the following: Cook at as low a temp. as you can without your burner flaming out. Cook as far away from the flame as you can, if a double burner, put meat over the unlit side, for example. AVOID FLAIRUPS!!

Remember..time and temperatureYou MUST introduce smoke to the meat, or it will not be BBQ. Period. Use some hardwood pellets or moistened Chips of hickory or mesquite combo applied to your lava rocks.

Oak is fine. NEVER USE RESINOUS WOOD, such as cedar or pine..the resin can impart toxins to the meat and make everyone sick. Smoke flavor is imparted to meats only within the first 2 hours and at below temps of 200F. Excessive smoking can only serve to blacken the meat, or overpower the flavor with smoke.

After two hours the meat seals and nothing else can penetrate the meat...that is why the low temps are so critical to imparting the BBQ spices and smoke deeper into the meat early on in the process. If you can not impart smoke to the meat, there is one other alternative...marinate the ribs in large ziplock freezer bags with each two slabs getting one cup of Worcestershire Sauce, one half cup of Wickers marinade, and one tablespoon of Liquid Smoke, which is a product found in the same section as the Wickers.

Marinade overnight..or for at least 8 hours before applying dry rub. It gives a false flavor, but it is better than no smoke flavor at all. COOKING TIME: It should take about 6 hours at 200 degrees (get an oven thermometer and place it on the grill close to the meat...this is the thermometer to pay attention to!), or 5 hours at 225, or 4 hours at 250. NEVER COOK HIGHER THAN 250F!!

All you are doing at that temp. is grilling, and you cannot successfully grill any cut of rib, except for Country Style Ribs. Apply Smoke for first 2 hours. After one hour, baste ribs with anything! Beer, wine, Wickers, Grammas favorite pork baste, whatever...just dont let the ribs tryout! After two hours of smoking, wrap EACH SLAB in HEAVY DUTY aluminum foil. Be careful not to punch holes in foil. This is the STEAMING process, which is the secret part that makes the ribs so tender.

To further tenderize the meat, pour a 1/3 cup of marinade, or Citric liquid (OJ or pineapple juice works best) into the foil over the meat, before carefully sealing the top of the foil. Wrap tight BUT WATCH FOR HOLES IN THE FOIL. Double or triple wrap, if necessary! That is why the extra heavy-duty foil is so important.

Cook in foil another 2 hours, at the lower temps and 1.5 hours if cooking at 250. NOTE: at the end of the foil process, when you open the foil of one slab to inspect, look for bones shining at you...this means they are steaming too fast and remove from grill immediately! If there is still mostly meat over the top of the slab, you are ok.

After 1.5 to 2 hours in the foil, take one slab off the grill and open the foil. Watch for hot steam! When you see this small amount of BLACK LIQUID (rendered fat) at the bottom of the foil, that is the signal to remove the slabs from the foil. This Black stuff is the so called "pig taste" that good rib cooks replace with pure BBQ flavoring.

If you are not careful, the black liquid will literally be reabsorbed into the meat, making them a little more porky in flavor. I sometimes stack my slabs on their side...like dominos to allow the Fat to slow off the slabs into the bottom of the foil.

Again, watch out for pinholes in the foil! At the appropriate time, remove the foil and place the slabs back on the grill....this will finish the cooking and firm up the ribs if they have gotten too tender.

About 30 minutes before serving...paintbrush on a mixture of: 8 parts BBQ Sauce (Cattlemans, Kraft or your own recipe will do) 2 parts honey some rub (to your taste) NOT TOO MUCH if you prefer a dry rib...SWAB IT ON if you want a wet rib. When the ribs are done, take off grill and let cool for about 10 minutes (as again, you should do with ALL grilled foods) before serving. Just before serving, lightly dust the slabs with your dry rub.

Cut into 3 or 4 bone sections, and ENJOY! Make sure you have plenty of Moist Towlettes or warm strips of cloth soaked in lemon juice, to fix up the sticky fingers. Serve with French Bread or Texas Toast, BBQ Beans and Potato Salad, with the sauce on the side for those who prefer. Ribs can be frozen after cooking.

Wrap in clear film or foil and place in the freezer. Leave in foil off the grill if you plan on freezing and cooking later. That required last hour of grilling/finishing will be achieved in the warming oven at a later date. To cook frozen ribs, remove from freezer and let thaw for two hours. Wrapped foil, and put in an oven at 220 for 45 minutes, they are almost as good as hot off the grill! Dont forget the sauce! Want to look at

? Watch them at the