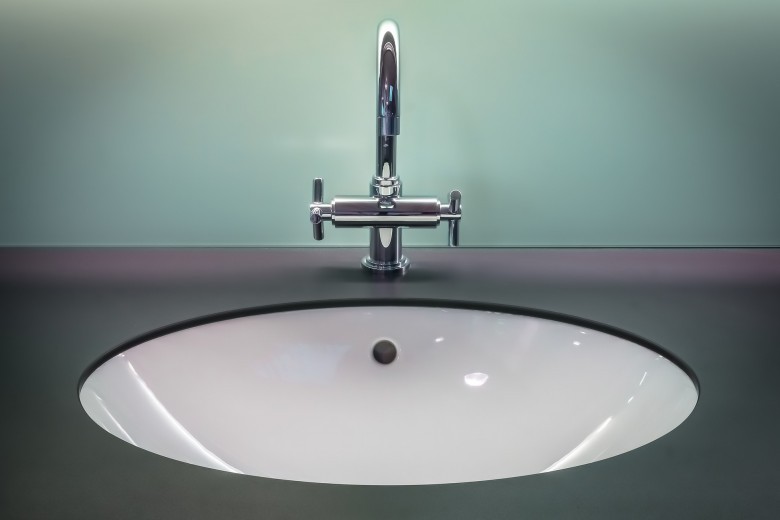 Bib tap Usually brass finished but also available chromium-plated. Has horizontal inlet. Brass taps with a threaded outlet for a hose connector are often used as garden taps. Inlet has BSP male thread. The tap is often connected to a wall plate elbow fitting for mechanical security.Sink tap Often chromium finish. Has vertical inlet. A back-nut is used to bolt the tap to the deck of a sink so the plumbing connections need provide no mechanical strength.

A sink tap should be tall enough to allow buckets to be filled so, before you buy check that the spout height (distance from top of sink to botÂ¬tom of spout) plus sink depth will be enough. Inlet has 1/2 in BSP male thread -usual pipe fitting is a tap connector.Sink mixer Mixers have separate hot and cold inlets, but a single outlet. Spout outlets can be pushed to either side - to feed two sink bowls or to make it easier to get things in and out of the sink. Usual spout length is 7in - but 9in spouts are better for double-bowl sinks.

Tap holes in sinks, and inlets on sink mixers, are usually a standard distance of 178mm apart. Inlets are 1/2 in BSP male threads -other sizes indicate the mixer is probably a continental type, which may not be suitable.Supatap This is a type of tap designed so that it can be rewashered without turning off the water. Several designs were available, but Supataps are most commonly found in kitchens as individual hot and cold taps. Now discontinued, but spares should still be available - you need to know the type of tap you have.Bath and basin tap Separate taps for hot and cold water. Many different patterns are available with different handle designs.

The type of handle often determines the price of the tap - ordinary cross-head is usually the cheapest. Check before buying that the handle is easy to grasp. If you want to be able to wash your hands under running water, make sure that the spout is long enough to project well over the edge of the bowl when it is installed. Taps have a vertical inlet with a BSP male thread 1/2 in for basin taps; Im for bath taps. Other sizes indicate continental-type taps.Bath and basin mixer Does not usually have divided-flow or dual-flow spout, and so must be connected to hot and cold supplies cither both coming directly from the mains or, more usually, both coming from the cold water cistern.

A bath/ shower and a diverter for switching the flexible pipe is attached to go to the shower, and a diverter for switching the flow of water from the spout to the shower or vice versa (diverters may switch the flow back to the bath automatically when taps are turned off). The tap holes in baths and bath mixer inlets are usually a standard distance of 7 in apart you may be able to buy a mixer with adjustable inlets for non-standard distances.

A basin mixer is sometimes called a 4in mixer because the inlets are a standard 4in apart. Taps have vertical inlets with male BSP threads - 1/2 in for basin mixer; 3/4 in for bath mixer. Other sizes indicate continental-type mixers.Three-hole basin mixer The hot and cold taps and the tap spout each fit separate holes in the basin. The connections between the spout and the valves are often flexible to accommodate different hole distances. A three-hole mixer with rigid connections usually has the taps 8in apart with the spout centred between them. A mixer which has taps 8in apart may sometimes be called an 8in mixer Â¬but the connections are not necessarily rigid. Does not usually have a divided-flow or dual-flow spout. Mixer usually comes with pop-up waste.

Taps have vertical inlets with 1/2 in BSP threads.One-hole mixer Available mainly for basins and bidets. Fits into a standard single tap hole. Spout usually fixed and is not the divided-flow or dual-flow type. Inlets are usually plain-ended 10mm copper, and adaptor fittings are needed to attach them to the usual 15mm pipe supplies. The pressure of water from cistern-fed supplies may not be high enough to give an adequate flow rate. (These are often continental-type taps intended for use on direct high-pressure plumbing systems.)Bidet set Through-rim supply bidets, with spray, use a complicated tap arrangement.

The hot and cold tap valves and the mixer body fit into separate holes in the bidet surround. The mixer body has a diverter to direct water to the rim of the bidet or, via a flexible tube, to the spray head in the base of the bidet. The mixer usually has flexible connections and a pop-up waste. A through-rim supply bidet has to satisfy particular regulations. An over-rim bidet can be fitted with single taps or a mixer lap.

Plastic taps Cheaper than normal chromium-plated brass taps; manufacÂ¬turers also claim that they are cooler to the touch. Some brands come in a range of colours to match sanitaryware. With most brands, only a restricted range of types is available. Plastic taps need extra care when fitting. No jointing paste should be used and no soldering should be done near them - even vapours from soldering fluxes can harm the plastic. The threads can strip easily - be careful when screwing metal nuts on to them.Lever taps Instead of a tap handle, which has to be turned several times from fully on to fully off, the lever has to be turned through only a quarter of a circle to turn the tap from full on to full off.

Sink mixers come with one lever working clockwise and the other anti-clockwise. To get this arrangement with separate taps, a pair has to be ordered. Not often used in homes but might be useful in a kitchen, or for use by elderly people. Some authorities might not allow their use, because they may give rise to water hammer.

Ceramic disc taps This latest type of tap also requires only a quarter of a turn to open it, which can be levers on kitchen mixers, for example or more convenÂ¬tional handles on other types of tap. Unlike an ordinary tap where a washer is lifted off a scat, a ceramic disc tap works by turning one circular disc so that its slots line up (or dont line up) with the slots in a second fixed disc.

The discs are claimed not to need rewashering, but the holding mechanism on some laps can go wrong.Tap conversion kitsTap conversion kits make old taps - with ordinary cross-head handles look more like new ones with shrouded handles. If your old taps are leaking because of a worn washer, a tap conversion kit will cure this but replacing the washer would be much cheaper and would involve no more work.

The most common type replaces the whole spindle assembly.Now you know about different types of taps, you should know

how to replace taps

how to replace a tap washer